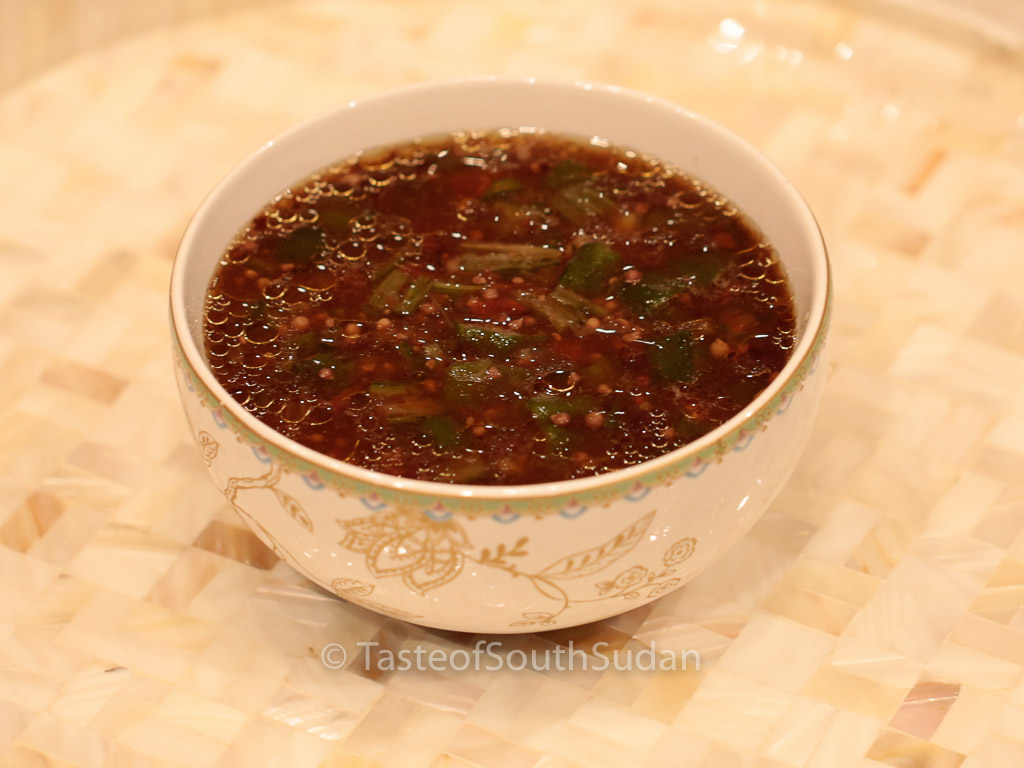 African Okra Soup with Kombo – Swala,  also called “Swala”, or “Mula Kombo ta Bamia”, is a specialty of the Kakwa tribe from Yei, South Sudan. It is a vegetarian, low calorie soup free of gluten. So it is in fact a light soup to serve prior to your main course or as a side dish. The special ingredient in this meal is the traditional salt  Kombo, which gives a distinctive taste and smell. All the ingredients are easily found, except of course, Kombo, which is specially made or sourced from South Sudan and Sudan. Variations to this recipe include addition of smoked meat or dried fish. Addition of peanut butter will thicken the sauce and change it to a stew.

We first introduced Kombo in the recipe  Nyete Greens with peanut butter. Kombo is a strong alkali solution, an alternative name is lye. Chemically it contains a mix of sodium hydroxides, potassium phosphates and potassium carbonates. In South Sudan and many parts of Africa it is homemade by running water through ashes. Place the ashes in a pot with holes at the bottom, run water through the ashes, and the liquid that leaches out into a receiving container is called Kombo.  To get a quality Kombo solution, our grandmothers knew to select dried plants from legumes, groundnuts, and specific trees.  The strong alkali solution breaks down the hard cellulose fibers in dark leafy greens that otherwise take forever to cook. Kombo is hard to measure, it is titrated based on taste, and based on the quantity of food being cooked.

In South Sudan, there are 3 forms of traditional salts used in foods that call for Kombo. One is the classic Kombo discussed above made by passing water through ashes.

The second type is a mineral salt collected from mineral rich soil in Wau, South Sudan. This form is easy to transport and store. As such women from Wau have collected this mineral salt for sale in Juba, and I have received samples, that I currently use in place of Kombo.

The third type is called Atrun, a white rock salt that is sold in Khartoum, Sudan. This rock salt is collected from the Atrun Crater in the Bayuda desert in Sudan. We found women in Khartoum cooking their molokhia  using Atrun, in the same way women from South Sudan use Kombo.

A modern day substitute to Kombo is sodium bicarbonate, or baking soda.

Uses of Kombo within Africa

Within Africa, use of traditional salt such as the use of Kombo in South Sudan is very common. I believe it is a common indigenous cooking method passed down generations and shared by many cultures.  In Kenya it is has many names but it is also called Magadi, the same name as the lake from which a soda ash is collected, Lake Magadi. In Cameroon, there is a limestone that is dissolved and used in cooking a traditional soup called Achu.

How to cook African Okra Soup with Kombo – Swala

To make this recipe, first add 1 cup of water onto a pot on the stove. Titrate Kombo. Add onions and bring water to boil.  Then add okra, let cook. Then add tomatoes, 1 tablespoon of oil and table salt. 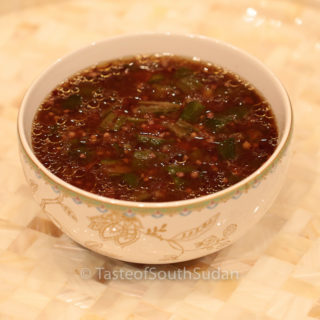